Chinese authorities have approved a plan to rebuild the central ancient town known as Shangri-La, which was destroyed by an overnight fire on January 11. The main town has several names reflecting its Tibetan heritage in this northwest corner of Yunnan province, going by Shangri-La (香格里拉 xiang ge li la), Zhongdian (中甸) or Jiantang Town (建塘镇 jiantang zhen) in Mandarin, or Gyalthang (རྒྱལ་ཐང་རྫོང་) in Tibetan, and the old Tibetan section itself called Dokar Dzong (Tibetan) or Dukezong (独克宗) in Mandarin. Both the town and county were renamed Shangri-La in 2001, after the mythical utopia in James Hilton’s novel, Lost Horizon, in order to draw tourism. 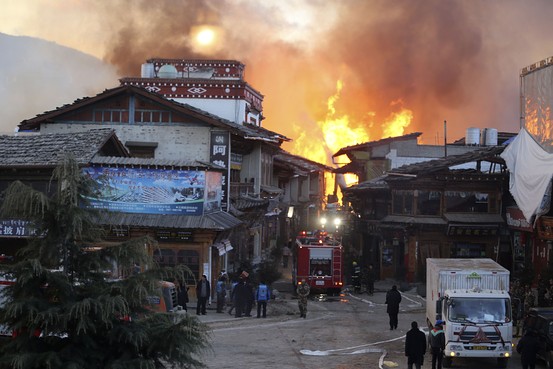 The town was a well-preserved village, known for being a more authentic traditional village than nearby Lijiang. More than 300 of the town’s original 1,000 wooden traditional Tibetan homes were destroyed by the fire, which will be rebuilt according to the plan over the next three years.

If you visit the Shangri-La area, be aware that much of the town has been leveled, and that construction will be ongoing for the next three years. The nearby Gedan Songzanlin Monastery, 3.1 miles (5 km) to the north of the Shangri-La village, remains open and is the largest Tibetan Buddhist monastery in Yunnan province.

See more about Yunnan’s towns and villages in this series of posts, where China Tea Leaves has been exploring Lijiang and the village of Shuhe 114 miles (183 km) to the south of Shangri-La.